In the first post of this series I focused on how the motor system changes in response to longstanding pain, basically with a shift in strategies towards more of a mass bracing pattern that over time tends to perpetuate the pain.  But that’s only half the story, at best – the way we perceive pain also changes in response to a chronic painful stimulus.  And, as you can imagine, those changes are not particularly helpful.  But, before we launch into a discussion of how the system changes, let’s start with talking about how it normally functions.  As with everything else our brains do, it’s an amazingly complicated process, so I’m just going to hit some of the highlights.

How Does the Brain Create an Experience?

We all like to think that we are directly connected with the reality of the world around us.  We use our eyes to see what’s there to see, our ears to hear what there is to hear, and we feel things based also on the stimulation of our nerves.  But the process is really not nearly that straightforward. 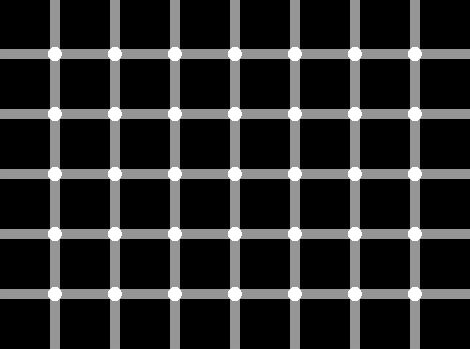 This is an example of an optical illusion, where the viewer is asked to count the number of black dots.  Problem is, they keep moving around – white when you look right at them, black when in the periphery of your vision.  In reality, they’re all white, but the brain does not accurately present that information to your consciousness because it is affected by the dominance of the black squares.  There are also examples of auditory illusions, tactile illusions, even smell illusions!  And let’s be careful about this term ‘illusion’ – the perception is quite real – I really do see little black dots in that picture.

So, the best way probably to think about how we experience the world around us is to envision a product that has been presented to our consciousness by our brains, after taking multiple inputs into account.

So What Goes Into the Experience of Pain?

Quite a few things.  The first, obvious one is stimulation of a nerve or nerves, at least in most cases.  That input to the brain is called nociception.  But we know that nociception is neither necessary nor sufficient for the experience of pain.  For example, consider a person with phantom limb pain after an amputation.  The sensory nerves and the tissues that they are responsible for no longer even exist, but the person nevertheless experiences extremely real pain.  We’ve all heard stories about people with terrible injuries who didn’t realize that they even had the injury until later, because they were busy dealing with the situation at hand.  Or, on a more daily level, that cut or scratch that didn’t start to hurt until you saw it sometime later.  Some of the other inputs the brain takes into account in generating an experience of pain are things like our sense of body position, what we’re seeing and hearing, and what our prior experiences and beliefs surrounding similar circumstances are.

The key thing to remember here is that the purpose of pain is to alert us of a threat, and that the brain is attempting to make a threat decision with what it presents to our consciousness.  The more threatening the combination of inputs is, the greater the pain is.  Lorimer told a great story that summarizes this well.  He was walking in ‘the bush’ as they call it in Australia, and felt something catch his foot momentarily.  There was no pain, just a catch, and he continued with his walk.  Then he woke up in the hospital – he had been bitten by an eastern brown snake, a terribly venomous snake with an extremely painful bite.  But his brain had not reported pain to him, because he had such a large experience of walking in the bush and scratching his leg on twigs, so the very similar input of the snakebite was not judged as dangerous.  Months later, he was again walking in the bush and felt something catch his leg, but this time it was hideously painful, with persistent pain for a week afterwards.  But, you guessed it, scratched by a twig.  But that combination of inputs – walking in the bush, stimulus to the outside of the leg, etc – was now on the ‘really dangerous’ list as far as his brain was concerned, in that last time it nearly killed him.

Let’s pause here to summarize all this.  Pain is an experience, not a stimulus.  It is generated as a result of many inputs, including both things happening to our bodies and around us as well as our past experiences and beliefs.  Nociception (that stimulus of a nerve fiber in a tissue in the body somewhere) is neither sufficient nor even necessary for the experience of pain to occur.  There is, rather, an extraordinarily complex orchestra of events that are oriented around risk assessment that leads to the experience of pain.  And, like anything complicated, sometimes that orchestra starts to malfunction.  In my next post I’m going to talk about how that happens, but the really short version is that the more the orchestra plays the pain tune, the better it gets at it, until it’s going on and on in a way that is partially or even completely disconnected from the input its getting from the tissues.  It looks a bit like this: