How Does Chronic Pain Change the Sensory System?

In my last post I tried to outline the super-complex process that the brain goes through to generate the experience of pain, and what I want to try to do today is talk about what changes when the nervous system is bombarded by pain impulses over a long period of time.  This can be a challenging idea to transmit to people who have had pain for may years – they have nearly all heard some refrain on the idea that ‘your pain is in your head,’ with the subtext being ‘your pain is not real’ or, worse yet, ‘you’re faking it.’  I have had patients become angry and leave care, or become tearful or defensive when I try to bring this topic up, which is why I wanted to spend the time writing in my last post about how the experience of pain is generated by the brain.  What we are talking about here is not ‘the subconscious’ or anything like that – it’s about structural changes in the parts of the brain responsible for processing various inputs and generating the output or experience of pain.

There are several ways that the nervous system adapts over time to pain, and unfortunately the idea that we get tougher or desensitized is not at all accurate.  Remember that our nervous system is “plastic”, that it, it changes its structure in response to stimulus.  Generally, the more of a stimulus you give the nervous system, the more ‘resources’  it devotes to that stimulus.  Think of practicing a skill like hitting a golf ball – to break down the details of that, we improve our skill at that because with practice we devote more neurons to the motor program.  Or think of a sommelier who can identify many nuances of a wine — again, more neurons devoted to that process.  With pain, what we see is that the spinal cord itself ‘turns up the gain’ on its pain pathways, devoting more neurons to nociception (pain stimulation) than ‘normal.’  It looks a bit like this diagram, if you think of the vertical axis as being basically loading to a tissue, with the peak being the point at which injury would occur: 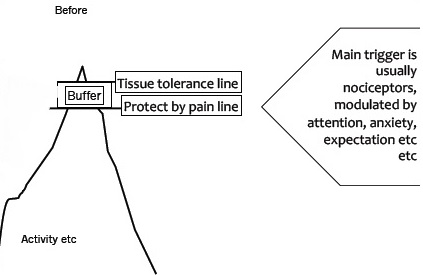 This is how pain is supposed to work – the person feels pain just a little before the point at which tissue damage occurs.  But when the spinal cord is turning up the gain, it looks more like this: 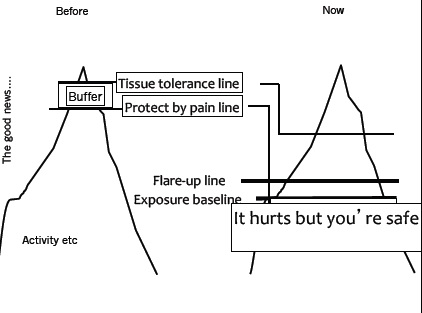 Abnormally early onset of pain in relation to tissue load

In this diagram you see that there has been a change in true tissue tolerance related to the original injury but the nervous system begins to generate pain far before any tissue damage begins to occur.  Let me emphasize here for a minute again that this is TOTALLY REAL PAIN, it just isn’t calibrated well to tissue damage anymore.  This change appears to happen primarily in the spinal cord, and as such is often referred to as “central sensitization.”

As if this isn’t enough, the brain itself has to get into the act.  As with other things I’ve described with this series of posts, the changes are complex, but there are two main themes – loss of precision and a process called facilitation.  We’ll start with the loss of precision.  As neurons in the sensory cortex of the brain are continuously bombarded with stimulation the stimulation basically starts to bleed over to neighboring neurons, to the point that brain imaging scans show overlap between areas of activation in the brain with stimulation of different parts of the painful region.  Patients experience a sense that their pain is spreading over time, sometimes even spreading to the opposite side of the body, and simultaneously becoming more difficult to describe.  Rather than pointing at the pain with a finger they wave at a whole area of their body, and they describe a sensation that the pain is ‘moving around.’  This loss of precision is easiest to ‘see’ experimentally in people who have a single extremity involved, say a very painful right arm.   We use our sensory cortex to help us identify whether we are looking a picture of a right arm or a left arm, basically sort of superimposing that picture onto our sensory cortex to see which side it ‘fits.’  Those patients with painful right arms, for example, are significantly slower to identify pictures of right arms than left arms, which tells us that their sensory cortex is not processing information quickly or accurately.

Facilitation basically means ‘priming’, and to understand this remember that the brain is absorbing information about many different things as it creates the experience of pain, and over time it no longer needs the entire set of stimuli to create the experience.  In our course, the analogy was to ask a group of attendees to stand up, then sit, then stand, then sit, etc.  Each time the speaker gestured along with giving a verbal command, until the last time when all he did was gesture.  And everyone stood.  A partial stimulus – had he just walked up to them and gestured initially they would have just stared at him – leading to the output of standing.  With pain, it might be the stimulus of an environment or activity that has historically provoked pain.  A case study of a bicyclist who had chronic pain with hill climbing was presented – she was placed in a setting where screens to either side of her could be tilted to make it look and feel like she was climbing a hill, and her pain could be brought on (and relieved) simply by tilting those screens, with no change in the actual intensity of her riding.  A partial stimulus of hill climbing leading to the experience of pain.  (You can read more about her here).

So…to recap:  Nociception (remember, that’s the name we use for nerves in the body that carry a painful stimulus to the brain) gets amplified by the spinal cord over time.  The sensory cortex of the brain that is responsible for generating the sensation of pain and sending it to our consciousness becomes somewhat sloppy (very like what happens with the motor cortex as I described in my first post on this subject).  And the pain system begins to leap to conclusions based on incomplete data.  Finally, just because I can’t say it enough times, the pain is REAL.  It’s just no longer accurately representing tissue damage like it is supposed to.

I have one more post in the pipeline, which will deal with what we can do in physical therapy to address this process, but the short version is that it is very much a thing that physical therapy can impact because it’s about retraining the brain, and PTs work with changing brain function every day.  Lots of things can change the way the brain functions, including everything from trauma (a head injury or a stroke) to what might amount to an overuse injury to part of the brain (chronic pain), and PTs treat all those things.  So if you have a history of longstanding pain that has not always ‘made sense’ to your medical providers, then consider giving us a call at 928-556-9935 or an email at [email protected]py.com. 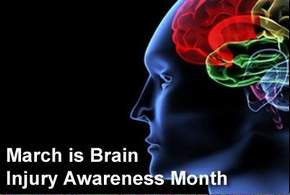 How “Aware” are You about Brain Injury?

Perhaps you have been following recent national news on the impact of concussions on athletes.  Perhaps you too are troubled by the staggering number of veterans returning from the wars in Iraq and Afghanistan with brain injury.  Maybe you have a loved one affected by Traumatic Brain Injury (TBI), Aneurism, or Stroke.  Perhaps you are one of the 3.5 million Americans living with a disability from acquired brain injury.

March is the month: Help Raise Awareness of Brain Injury.

Awareness and education lead to injury prevention, as well as improved outcomes for those living with the effects of brain injury.

Physical symptoms after brain injury may include:

A physical therapist skilled in neurological and vestibular rehabilitation can develop a plan of care to address these symptoms and help the person regain maximal functioning and quality of life.

If you or a loved one struggle with symptoms after Brain Injury, call the expert physical therapists at CoreBalance Therapy for an evaluation: